“Catching Colin’s eye is somewhat unnerving because, in that moment, it really is difficult to remember that he is not Pig.” 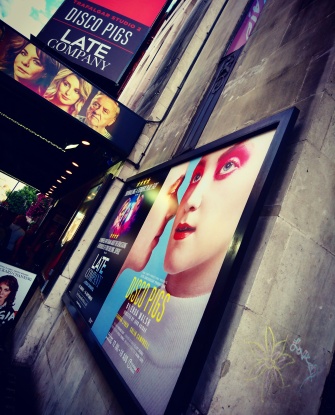 It’s been a while now, since I went to see Evanna Lynch and Colin Campbell in Disco Pigs in Trafalgar Studio 2, but it’s fair to say that it still remains at the forefront of my mind.

First of all, let’s set the scene: Studio 2 is an incredibly intimate venue, with the capacity to hold just 98 people in the audience. Studio 2 has no stage – it’s merely a dark room, and those sat in the front row (as I was), literally have the performers just centimetres away from them. Let’s refer to it as ‘spitting distance away’ since, yes, I did actually get some spit on me at one point during the performance. I wonder if that counts as audience participation..?

An intense setting for an intense play. Perfect.

Once I’d become accustomed to feeling as though I was back in drama class at school (in terms of proximity to the actors, not their acting abilities), I next had to acclimatise myself to the accent and dialect used in the show.

To give a little background, Disco Pigs tells the story of two inseparable friends, born on the same day in the same hospital and raised in Cork, Ireland. So close are they, that they’ve created their own language, which certainly renders it a challenge making sense of the dialogue for the first 15 to 20 minutes of the show.

Just turned 17, ‘Pig’ and ‘Runt’ venture outside of the universe they’ve created inside their heads for the first time to the world of disco, and in no time at all, we witness them spiral out of control.

In their new-found world of disco and drink, they party like tomorrow is never going to come, revelling in a game whereby Runt seeks attention from other men before Pig marches over, acting the affronted boyfriend and confronting each man who has fallen prey to their manipulation.

Perhaps predictably, Pig’s fierce protectiveness over the girl he has grown up with turns to feelings of romance. When they finally make it to the Palace Disco – the one Runt has set her heart on – the latter is surprised to find herself enjoying attention from a certain male, all thoughts of game-playing forgotten. Pig, however, doesn’t realise it’s game over, and he can never come back from the result of his actions that follow.

Marking the 20th anniversary of the production’s British debut, both roles were impeccably cast. Evanna’s very aura makes her an intriguing figure to watch on stage, and she immerses herself in this role with clear passion and thirst to explore the character. Her vacant expressions combined with the strong delivery of her lines make the character as baffling as I assume she was meant to be. As an audience member, you wouldn’t be alone in wanting to be able to read Runt’s mind, simply because she is that eccentric.

With Colin, it couldn’t have been more obvious that he gave his all to the performance – the evidence was there to see, from the wild glint in his eye, to the sweat pouring down his face. While he and Evanna both make frequent eye contact with audience members, catching Colin’s eye is somewhat unnerving because, in that moment, it really is difficult to remember that he is not Pig. With his outbursts of anger, it feels dangerous to be in his presence, and I’m sure the audience member who had to move hastily out of the way when he sent a prop flying can account for that!

For a show with such basic production values – think minimal props and set, no special effects, just disco lighting and blaring music – Disco Pigs has an incredible way of drawing you right in and rendering you unable to look away. Although moments in the show lack clarity and leave you feeling confused, the enjoyment remains, and I for one left Trafalgar Studios wondering what the hell I’d just witnessed.